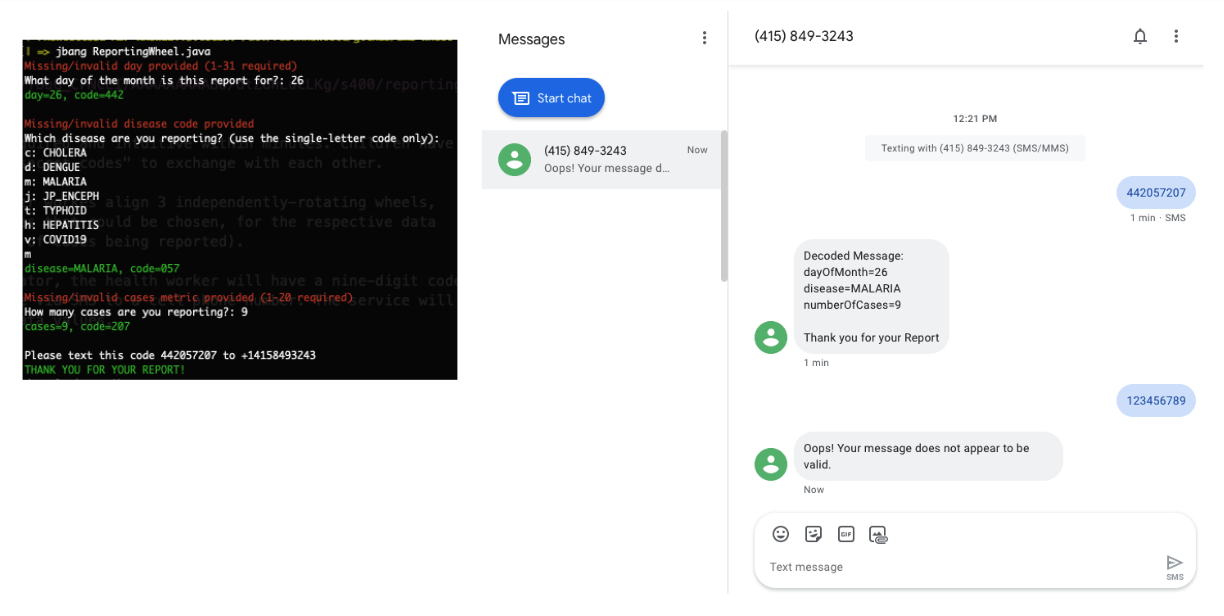 In the mid-to-late 1990s when I was in secondary school in Ireland, I chose to participate in the optional one-year Transition Year (TY) school program. TY lets students combine a regular academic school year with opportunities to participate in independent activites, including volunteer engagements.

I worked one month with the Rehab Group, a charity that provides people with a disability or disadvantage educational services and professional training. As I had developed a decent familiarity with personal computers by then, my responsibility was to train basic computer skills.

Those individuals’ disadvantages included prosthetic limbs, speech impediments, and learning difficulties, among others. Many had never used a computer before. For those that struggled to type, I introduced voice recognition software (Dragon Dictate), so they could speak into a microphone to “write” emails to relatives. I showed them how to use Microsoft Word and find information using a web browser.

There was one incident however that stuck with me all these years later. An elderly gentleman entered the training room and sat down at the computer, visibly nervous.

The first thing I did with every person was to ask them turn on the desktop computer via a button on the front of the box. Most pressed the button without issue, but he was extremely hesitant to touch the device.

I demonstrated the various components - the monitor, the keyboard, the mouse. He expressed concern that if he did the wrong thing, would the computer “blow up”? I reassured him that we were safe and that the computer would not physically harm him.

Once Windows had loaded and the desktop was displayed, it was time for the first lesson - opening an application.

“Move the mouse to the Start Menu over here please”, I said.

He glanced at me, nodded, and looked at the mouse. He then picked it up, raising it into the air and held it to the bottom-left corner of the monitor’s screen.

I do not tell this story to mock him. What I realized that day is the interfaces we use with computers should not be assumed to be natural. That the instructional language we use is often abstract and assumes a level of technical familiarity above what people may be comfortable with, or even capable of.

Ever since then, I’ve always been drawn to designs and solutions that leveraged technology in a manner that people like that gentleman at Rehab could avail of.

In that vein, I loved recently discovering InSTEDD’s Nicolás di Tada’s blog post from 2010, “IT without Software” describing how his team needed to build a system for workers at remote health centers in Thailand and Cambodia to report disease cases data in a semi-structured way.

Most case reports were being communicated by phone calls to the district offices, which aggregated the data by province, losing the fidelity of the original health center’s report.

The team wished to use SMS as the primary communication medium, but there were several challenges identified that needed to be addressed in determining a reporting syntax, including:

The InSTEDD team devised an ingenious solution to this - physical reporting wheels made of basic materials like paper or card-stock: 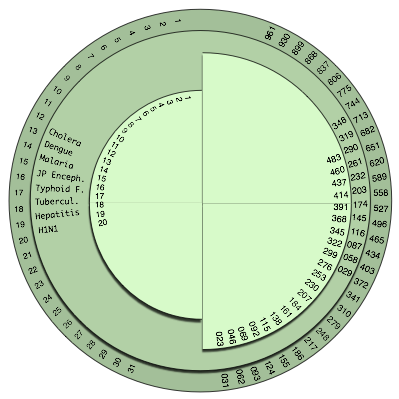 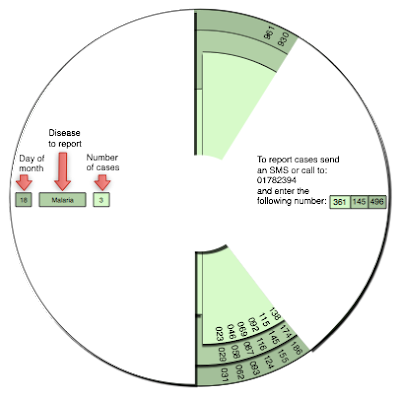 The wheels were cheap and easy to build but sturdy, with no batteries required and intuitive within minutes. You may have seen children using similar devices, called decoder wheels, to create “secret codes” to exchange with each other.

The reporting wheel the team created enabled health center workers align 3 independently-rotating wheels, each with a 3-digit code for choosing one of an enumerated set values for the respective data point (in this case, the day of the month, the disease, and the number of cases being reported).

Once each value has been chosen and aligned with a indicator, the health worker would have a nine-digit code that codifies the data values and could send that code via SMS to a cell phone number. The service will then reverse engineer that code back into the original data values.

Codification of the nine-digit message

Most interestingly of all, the system also needed to address some major usability aspects:

While not outlined explicity in the post, the images above provide the answer. For each wheel, the first code value is a prime number and each subsequent value is a multiple of it. The other wheels also started with a prime number - indeed, sequential primes are being used - 23, 29, 31.

This seemed like a fun idea to experiment with to try out Twilio’s SDK and some other libraries that had recently caught my attention.

JBang, by Max Andersen, is one of my favorite open-source projects of recent years. It’s premise is simple - make scripting with Java as fast and as easy as other languages like python or kotlin.

At SnapLogic, it’s been brilliant for my team to use it for rapid exploration of various SDKs and APIs, and to reproduce specific scenarios quickly.

The first action was to build a script to simulate the reporting wheel demonstrated above. I wanted a command-line interface (CLI) approach where the user could provide the data points as arguments or be prompted for each one, validating the input as it went.

JBang’s landing page demo used PicoCLI so that was good enough for me and I was able to quickly define the options the user would provide:

JBang will download Java 11 if the user does not have it installed, it will download the PicoCLI dependencies need to compile the code and package it into an executable JAR file.

Codification of the message via Prime numbers

I wanted to simulate using different reporting wheel types targeting the same reporting service number, so I randomized which prime would be used as the intial seed value for the first “wheel” value. The next 2 prime numbers would then be used as the prime seeds for the second and third wheel values respectively.

This is how I would ask the user for input, re-asking until valid input values had been provided:

Using PicoCLI like this allowed both a direct and interactive choice of user input. For example, consider the direct invocation:

compared to the interactive approach:

You may notice that the nine-digit codes generated are different (“182033117” vs “130021099”) for the same input values, but that is due to the randomized prime seed selection simulating different wheel types being used (even though the data points being used are the same).

Decoding the message and replying via Twilio-enabled SMS

To decode the message being sent, I needed a few things first:

My team had built the Twilio Snap Pack and had reported on the excellent quality of the APIs and SDKs provided.

I purchased an SMS-capable phone number from Twilio for $1 in about ten seconds.

Next, I read up about webhooks that could be used to receive callback requests when messages had been received by the newly-purchased Twilio number. I didn’t really want to set up a server on the public internet for this, but Twilio’s CLI came to the rescue with an excellent developer-friendly feature.

The tool had integrated with ngrok to create a “tunnel” between ngrok and my laptop. Any requests to the assigned ngrok.io endpoint would be “forwarded” to the web service running on my local machine. This allows real local debugging in my IDE rather than relying on webhook-capture sites like RequestBin.com (Pipedream).

Finally, it was time to build the web service that would receive the webhook request from Twilio containing the codified message. I tweaked an existing Twilio example that used the Spark Java Framework to create an /sms API endpoint that received the POST request:

Run the server via JBang like so - it will start listening for requests from the Twilio webhook:

My approach to reverse engineer the codified message is a little difficult to explain consisely but it follows this logic:

I didn’t want to blindly build an n * n * n hashtable for all possible combinations of 9-digit codes - I figured there probably was a more efficient approach.

Therefore, taking the first three digits of the codified message, I could figure out which prime number seed or seeds was potentially used.

Knowing which prime seed was used could be determined by examining the remaining digits of the codified message (identifying the diseases and number-of-cases).

Similarly, last 3-digits for the number-of-cases value would use prime number seeds 5 or 7.

The other two cache maps would then have keys 3, 5, 7 etc. whose values were lists of codified number multiples e.g.

Identify the prime seeds used in the original message

Through a process of elimiation, only one combination will be valid. Once that combination is found, we can fully decode the message via the indexes of the matched codes. If no combinations applied, then the code received is invalid (i.e. likely a typo occurred):

Finally, we have what we need to reply to the sender, confirming the original data values that the health worker chose on the reporting wheel and thanking them for their report: 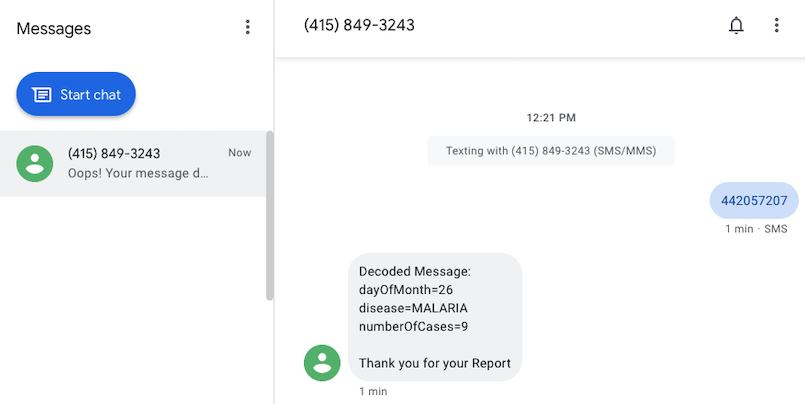 If the codified message received was invalid, we would let them know also so they can check their wheel and resend again:

The code used in this project is available here: https://github.com/robinhowlett/accessible-sms

There wasn’t anything particularly brilliant on my part about this application. Yes, the prime number seed approach can require some focus to follow, but the idea came from the InSTEDD team and I just applied a simplified version of it.

Twilio also did all the heavy lifting with running virtual phone numbers, on-message webhooks, ngrok integration and a well-designed SDK.

I’m sure there is plenty of other material out there showing much more sophisticated demonstrations of communication platforms with richer user interfaces and experiences.

But what is worth remembering is that when communications techology is used in a way that accomodates everybody, even those sometimes forgotten because of resources, language, education, opportunity or accessibility, it can still provide life-changing benefits to real people, even in the farthest reaches of the globe.